Not often talked about, but more common than one knows is a disease called Peyronie’s, a disorder in which hard fibrous scar tissue develops in the penis forming hard plaque. This devastating disease, which is thought to be incurable, is what drove Dr. Donaldson to seek alternative treatments for men with Peyronie’s, since traditional treatments are often not adequate for this disease.

How common is Peyronie’s Disease?

Studies indicate Peyronie’s may affect 1-23% of men between 40 and 70 years old.* Because Peyronie’s can be embarrassing and not often talked about, or because men may not know that is what they have, the incidence of Peyronie’s is probably much higher than shown in studies.

What are the signs and symptoms of Peyronie’s?

Symptoms can occur slowly over time or very quickly. The first sign is noticing hard lumps on the penis, a curve in the penis, and/or a shorter and thinner penis. The outcome of these signs is Erectile dysfunction. Pain during sexual intercourse or with an erection can also occur because of the plaque formation.

The hard fibrous scar tissue interrupts the blood flow in the penis during an erection. This interruption of blood flow and decrease in full erections, can also cause the penis to curve, shorten, and in some cases lead to severe curving of the penis causing painful erections. Sometimes over time, the pain can go away while the curvature of Peyonies remains. In all of these instances, the fibrous tissue can make getting an erection and maintaining an erection difficult.

What is the cause of Peyronie’s?

Although experts say they don’t know the exact cause of Peyronie’s, many believe it to be a direct response of the penis to trauma. When trauma occurs to any part of the body, a fibrous scar tissue occurs as part of the healing process. This same thing happens to the inside of the penis to create the fibrous plaque that causes erectile dysfunction.
Common causes:

How do you treat Peyronie’s?
Peyronie’s can sometimes resolve on its own if it is detected early without any treatment at all. However, when it does not resolve on its own, it has to be treated in order to restore and maintain the ability to have sex and in some cases reduce the pain.
Traditional treatments:

At SCMC, personalized protocols are developed using several different techniques all geared toward breaking down the fibrous plaque formation and re-establishing blood flow to help repair the area of plaque. In addition, we are always looking for even better means of eradicating this disease for men.
We are excited, as those with Peyronie’s should be, there is finally hope for men with this injury using natural means with no side effects. SCMC is also very excited to be able to offer treatments for this disease.

The clinicians at the Steel City Men’s Clinic understand the stresses and challenges men face in their lives today, and how this can affect performance at work and at home. We use the latest procedures and technologies to help you!

Don’t put it off any longer! A happier, healthier you is just a phone call away.

Looking for more information on the Steel City Men’s Clinic? Contact us using the form below: 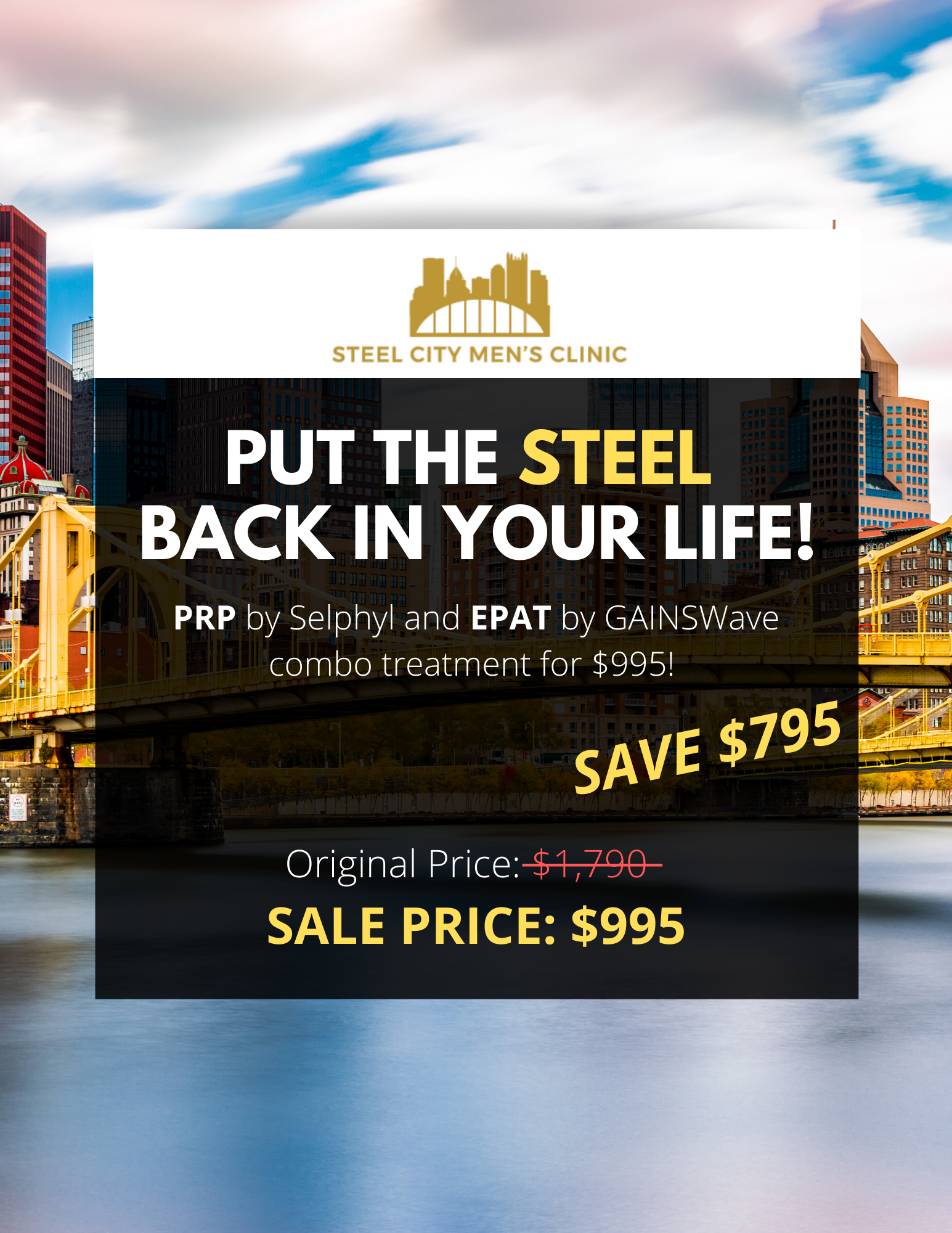